Laterna Magica Museum collection contains several cameras with bodies and bags covered in exotic leather. They are made in different colors of alligator, crocodile, ostrich, snake, lizard, and hippopotamus skin.

Today we make most of our leather from cattle skin, but there are numerous exceptions on the market. Soft leather is made of lamb, elk and deerskin. Pigskin is used on seats of saddles. Also buffalos, goats, dogs, kangaroos, and oxen are used to produce leather from.

The question is why exotic animal skin adds value to camera items, and how humans have agreed for hundreds of years that exotic leather is considered a luxury.

Exotic skin has been desirable through history because of the rare and exclusive, smooth, rippled, patterned and shiny texture. In modern time it remains popular on luxury items, even though many people are fighting for animal rights and supporting non-leather items in accordance with CITES (Convention on International Trade in Endangered Species of Wild Fauna and Flora).

IF DIAMONDS ARE FOREVER -
A CROCODILE BAG IS FOR A LIFETIME, AT LEAST

Major fashion houses such as Prada, Gucci, Birkin, Hermés and Louis Vuitton are using rare exotic skins because of the independent value the precious nature gives each piece, similar to how craftsmanship adds value to fine jewelry.

Skin in natural color remains popular because it adds a sense of timelessness to the style. It is appealing for connoisseurs who are willing to pay for soft skin and who are looking for a unique design.

Cameras covered in exotic skin are still fascinating and charming to some. Therefore Nikon Japan launched a new gold edition of their 2014 camera, covered in lizard skin, produced in 2000 pieces, and sold for 1200 dollars. Leica made an expensive new edition in 2010 with the camera covered in ostrich leather. A company called Cameraleather outfits cameras in any material the customer wants, and offers exotic skins such as lizard and cobra, because it is long-lasting and easy to apply. 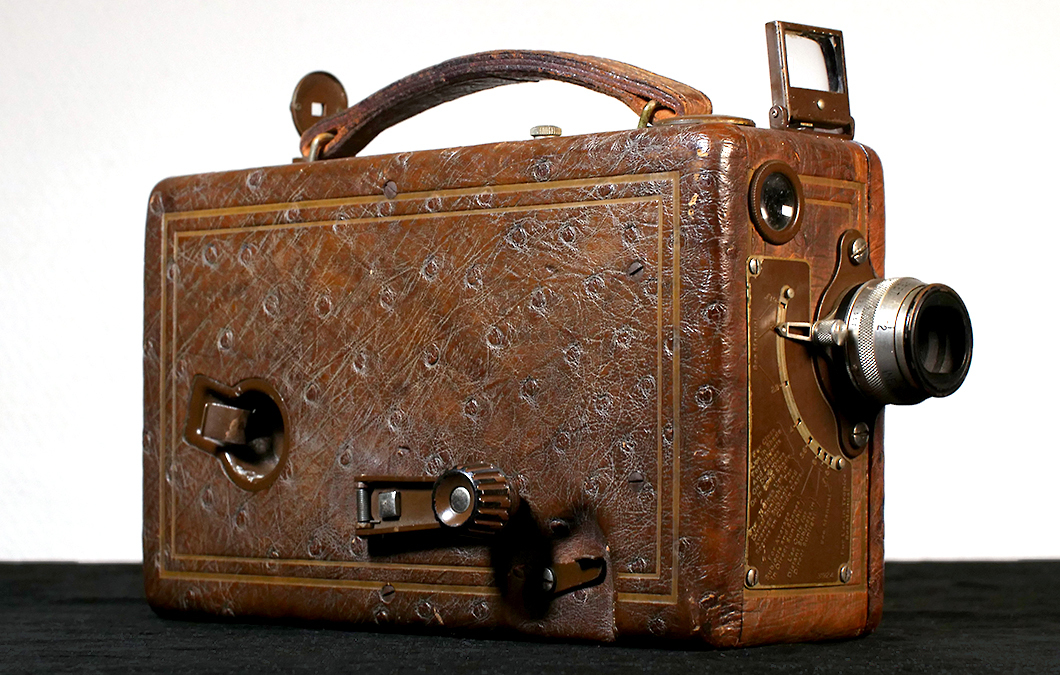 This is a relatively rare Cine-Kodak model with an ostrich skin covering. It came with a matching ostrich skin covered carrying case. It is likely that 500 or less units were ever produced. The basic Model B sold for 85 USD in the 1920s. 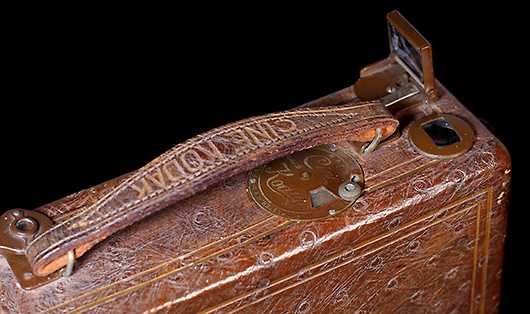 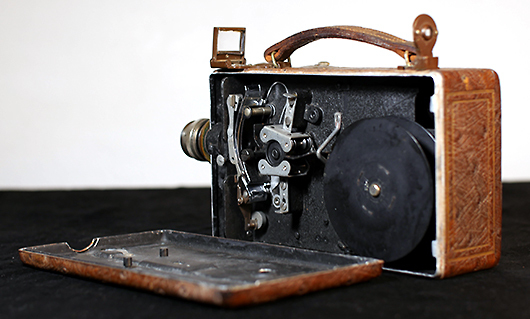 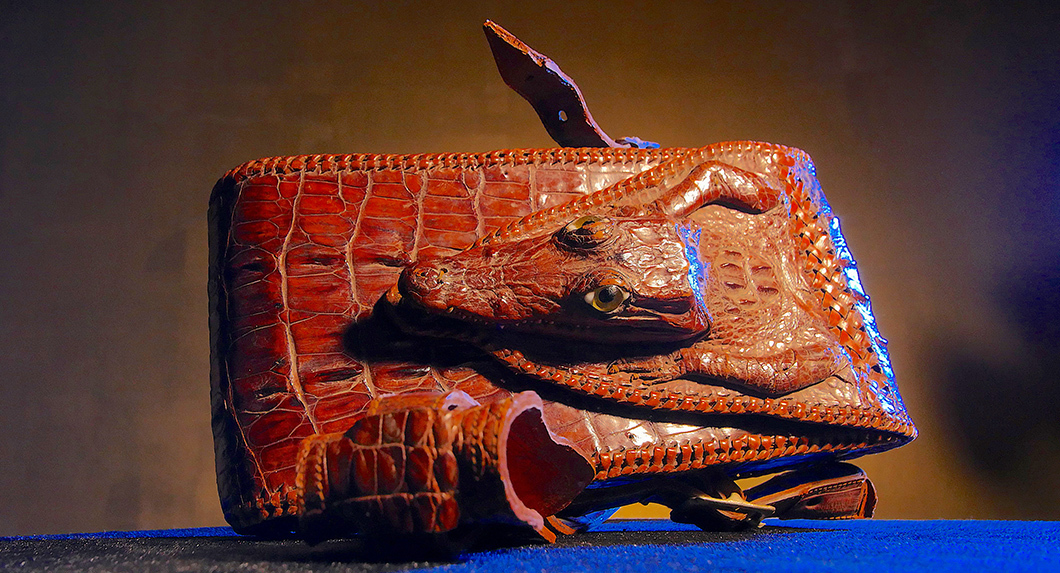 Deco folding camera case from the 1930's/40's made in real alligator skin including head and legs with hidden closing mechanism behind the mouth. Some manufacturers went all the way and made a complete camera bag of an entire alligator. ​ 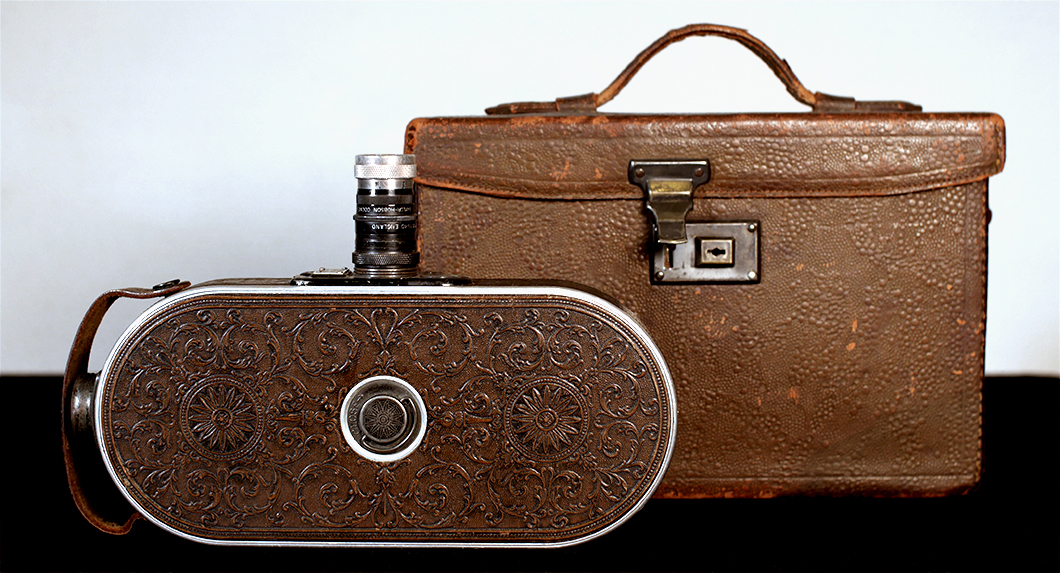 Filmo is a series of 16mm and 8mm movie cameras, projectors and accessories made by the Bell & Howell Company starting in 1907.

The 16mm Filmo 75 Field Model Cine Camera, which has a metal casing covered with embossed ornate leather, was produced in Chicago in 1931. The camera was quite compact for its time and was marketed as a 'watch-thin' ladies' camera. Its ornate leather covering was available in Walnut Brown, Ebony Black, and Silver Birch, as shown at the top of this page.

The Filmo camera was built to the most precise standards in the industry. Durable and ruggedly built, it was standard equipment for U.S. military combat cameramen from World War II through Vietnam, and the news-gathering camera for TV stations from the 1950s through the 1970s. 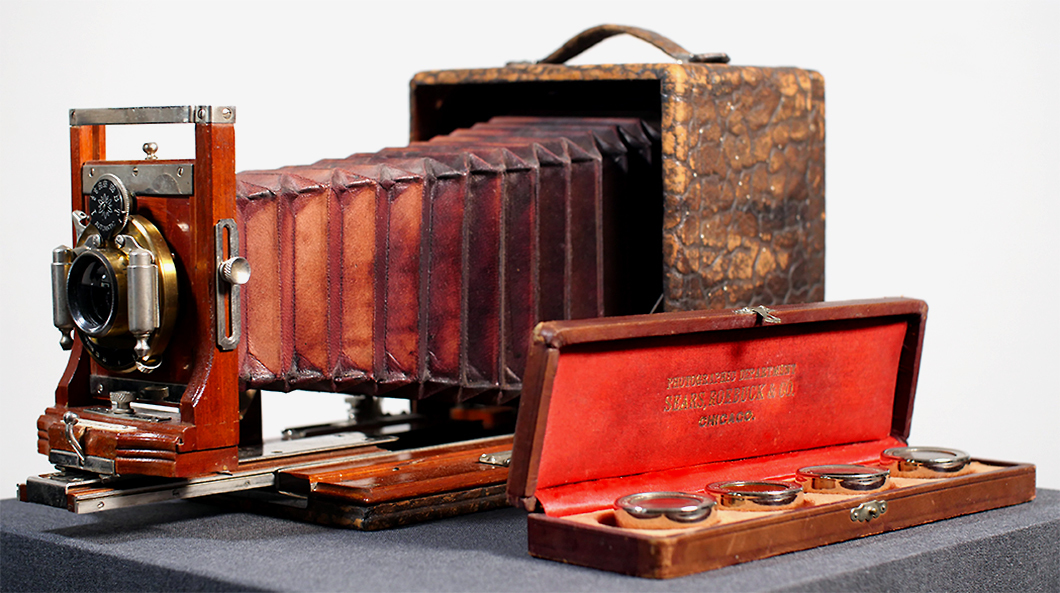 The Conley Long Focus Camera, Model XV, was manufactured by the Conley Camera Company of Rochester, Minnesota, from approximately 1900 to 1918. The 4x5 plate camera was made in 1912 for Sears, Roebuck & Co.
This dry plate folding camera was designed for landscape and portraits requiring a long focal length. The camera was constructed of solid Honduras mahogany wood, dovetailed, rounded corners with hand rubbed piano finish. It was covered in heavy walrus grain genuine leather. The bellows are red Russian leather, gossamer lined with an extra long capacity. All metal parts were made of brass with nickel plating and highly polished. It was fitted with a revolving reversible back. A double spirit level was also included.

The lens board is detachable and large enough to accommodate any lens. The lens provided was a high grade rapid Orthographic and

the shutter was a Conley automatic with finger and pneumatic release. It utilized the Conley flexible valve plate holder, a reversible brilliant view finder with nickel hood. The front had adjustable rising and falling front with side shift adjustment.

Convertible lenses like the triple-convertible Wollensak 6.5" f/4 / 10.5" f/16 / 14.5" f/16 together with the up-, down- and side-wards moveable front standard and the tiltable bed made it more versatile than the average plate folders.

Introduced in 1948, the Zorki was the first 35mm camera made by Krasnogorsk Mechanical Factory (KMZ). The first Zorki was an exact copy of the 1932 Leica II rangefinder and featured a 50mm f/3.5 Industar-22 lens.

The body of the camera presented has a golden look and a snake skin cover simular to the Leica Luxus II camera. The Leica Luxus II was the first Leica camera with a built-in rangefinder and the most extraordinary camera ever developed. 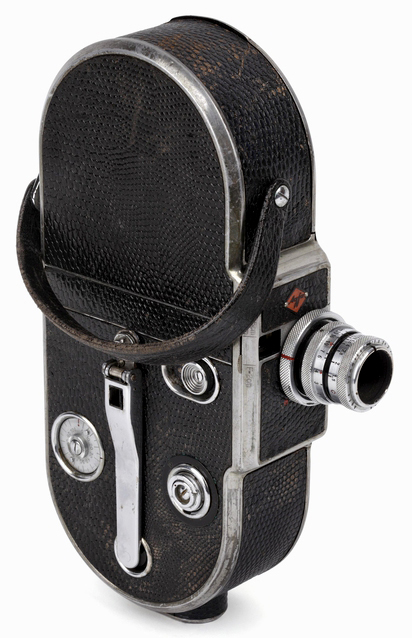 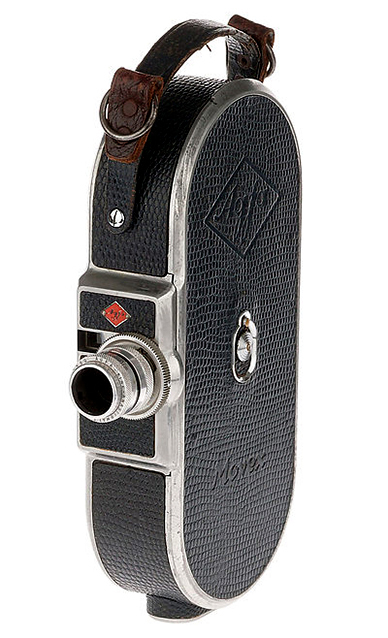 The Agfa Movex 16 mm movie camera was produced in Germany in 1932-36. The design is similar to the Bell & Howell Filmo cameras from the same period with its slim shape, animal skin cover, and winding handle. 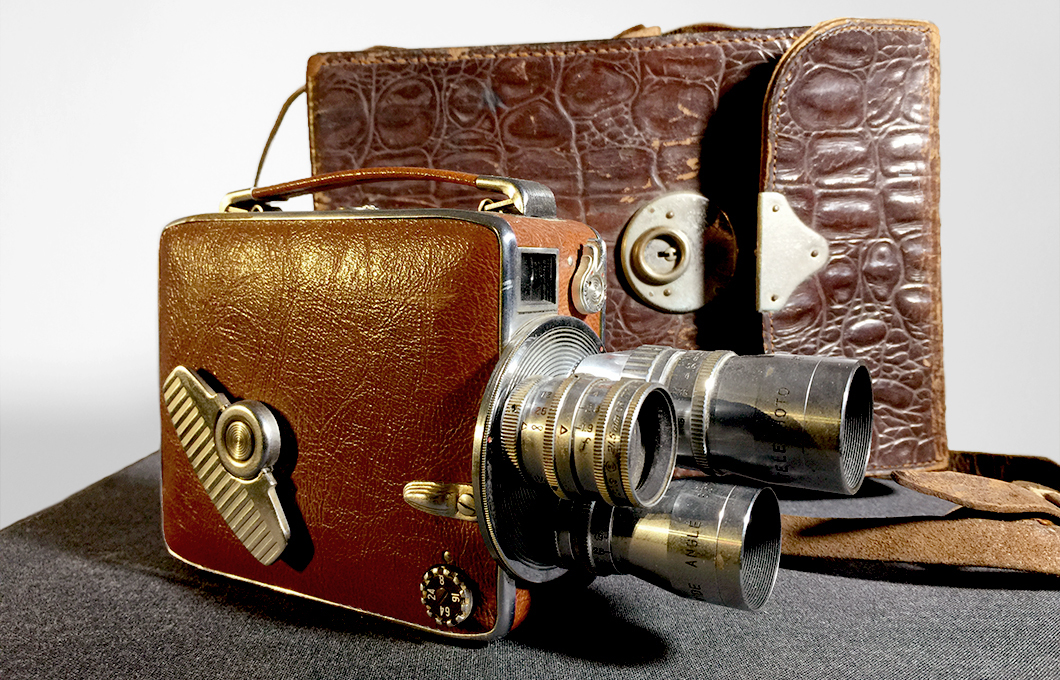 It is a compact, light and easy to handle movie camera. The metal housing is covered with brown leather and trimmed with satin chrome. This camera comes with a specially fitted crocodile leather bag. There were two models: the normal K45 and the deluxe K45 Riviera.

Balda was a German camera maker founded in 1908 in Dresden, Germany. Beginning in 1928, the company produced a series of 6×9 box cameras. The Balda Poka I is a 120 film camera taking up to 8 exposures. It has a metal box with leatherette covering, meniscus lens, and a genuine crocodile skin bag. 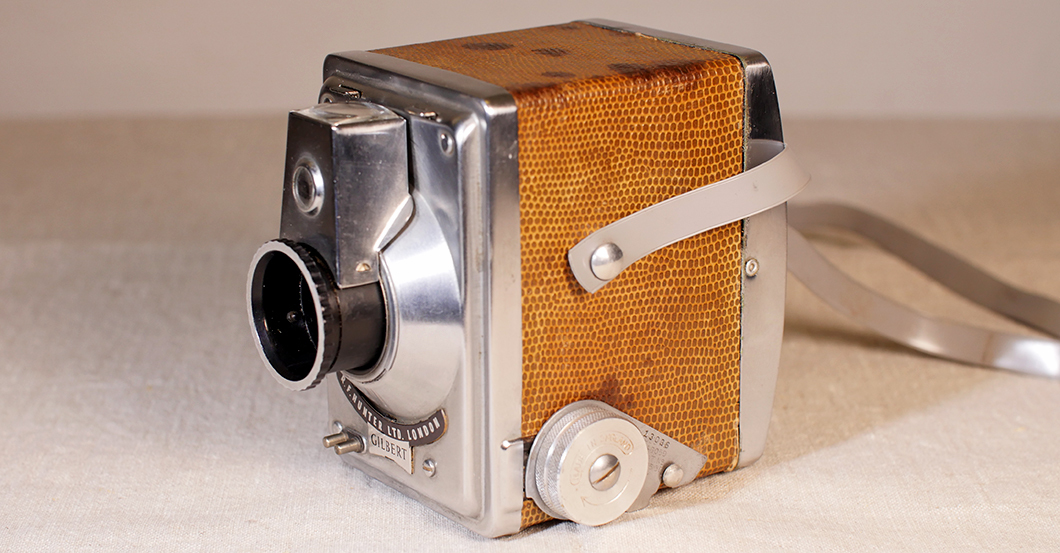 The Gilbert is an unusual British box camera introduced in 1953 by R. F. Hunter Ltd. and marketed as a 'family holiday camera'.

Perhaps the biggest difference between the Gilbert and other box cameras is its appearance. The Gilbert is made of stainless steel wrapped in lizard skin. Because of its steel front face, it looks robust but elegant. With the lizard skin its styling can be placed between industrial machinery and the world of high fashion.

Dominating the front of the camera is a 105mm f/11 lens with a large rotating viewfinder for transitioning between portrait and landscape orientation. There are two metal tabs located above the lens. When looking into the lens, the left side tab controls the aperture with two settings “sunny” (f/11) and “dull” (f/5.6), while the tab on the right switches between the two shutter speed options “fast” (1/50) and “slow” (1/30).

The Gilbert takes eight 6×9 cm images on 120 film. The shutter has a double-exposure prevention lock. When looking right into the lens, a red circle indicates that the camera is not ready to shoot. When the shutter is rearmed, the circle becomes green.