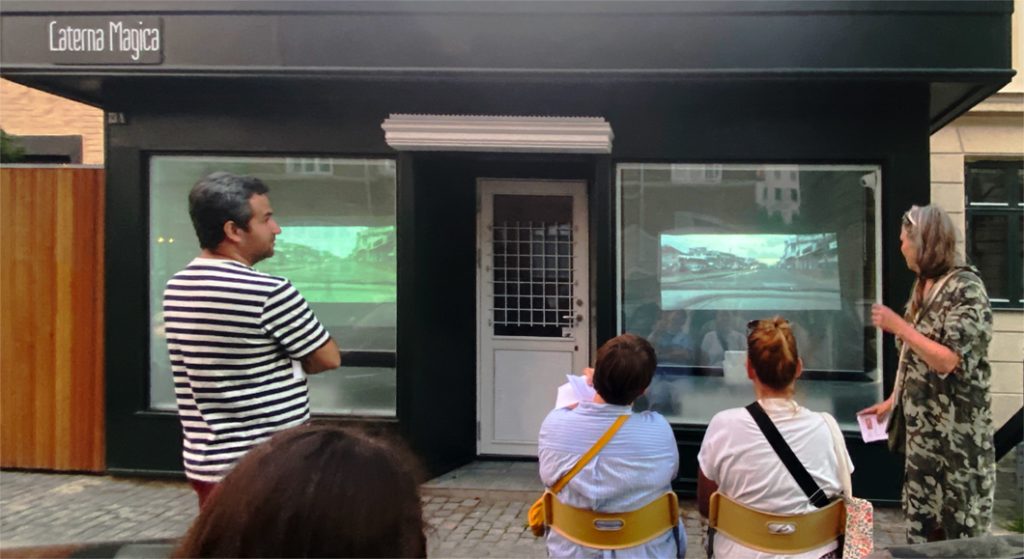 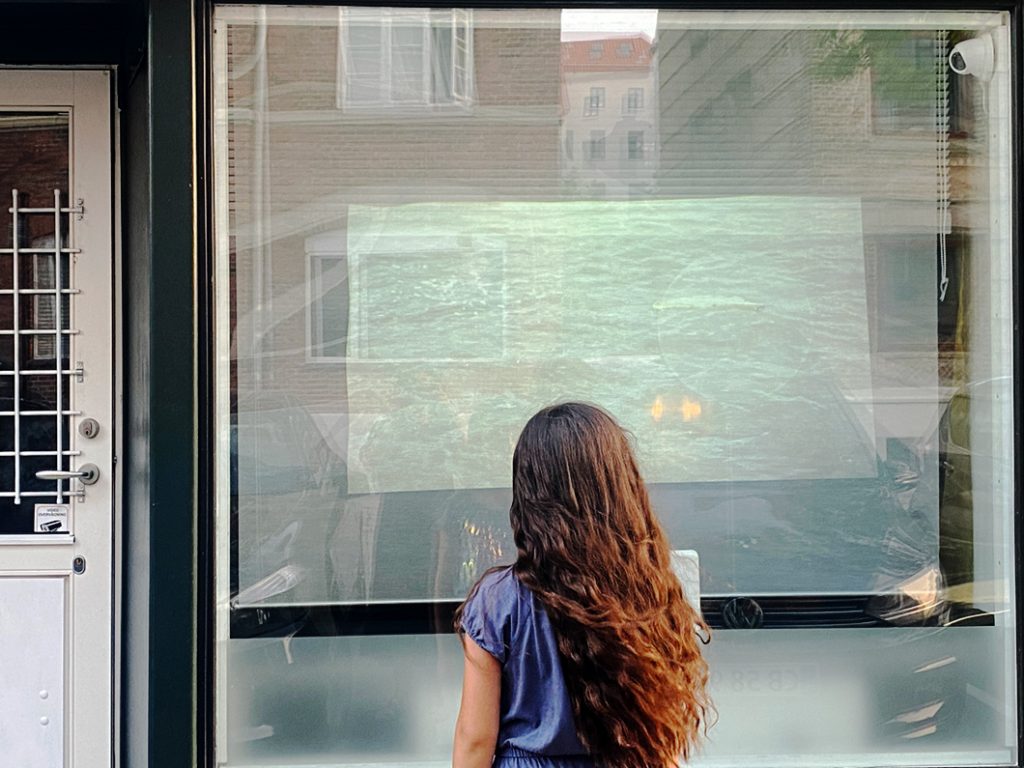 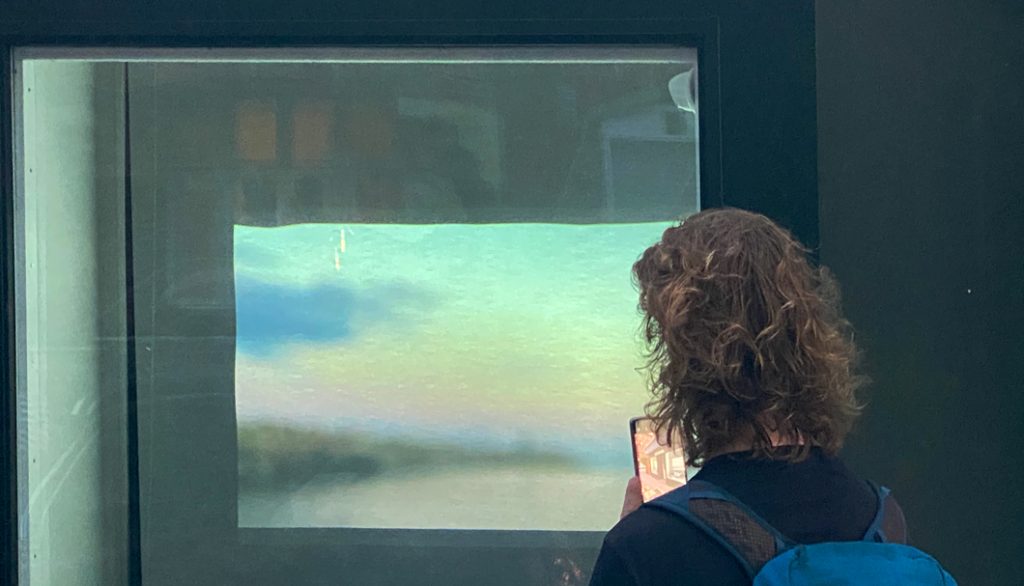 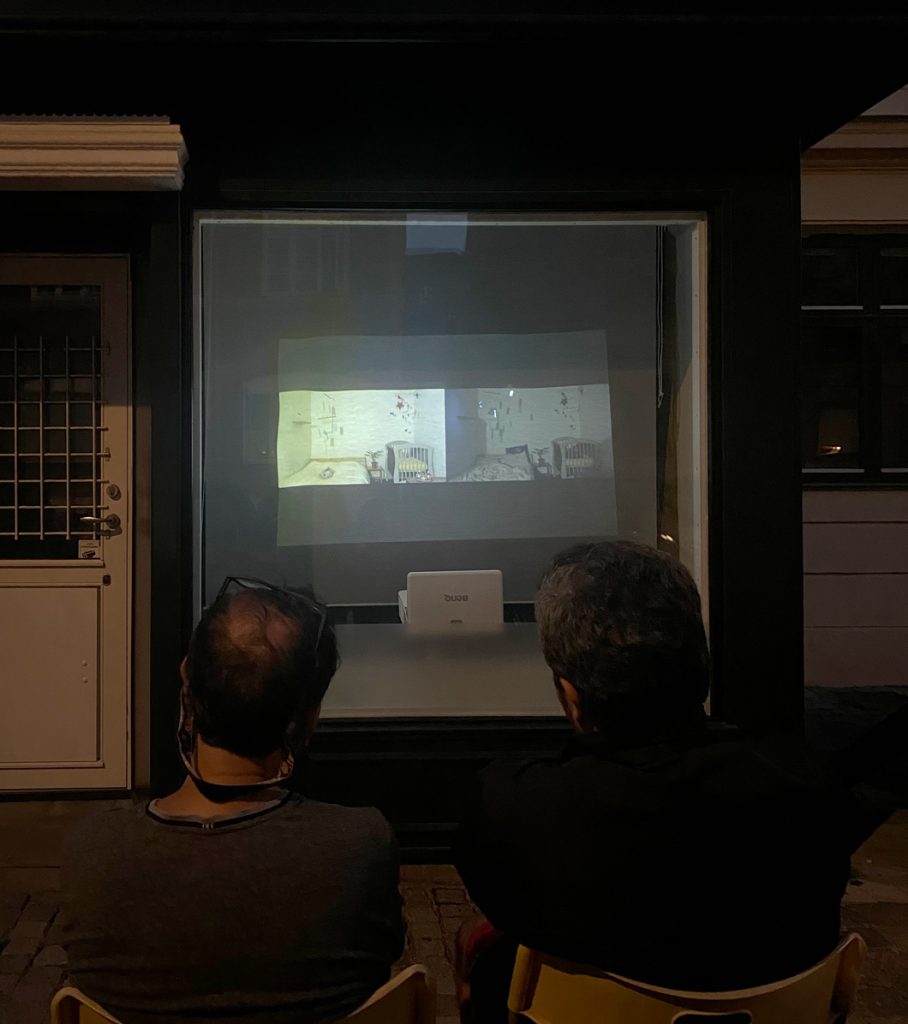 Albert Camus’s quotation inspired our concept: “Until now I always felt a stranger in this town, and that I’d no concern with you people. But now that I’ve seen what I have seen, I know that I belong here whether I want it or not. This business is everybody’s business.” The Plague, p.209

In the novel, the narrator is a stranger who finds himself separated from his own home and his wife because of the Plague which invaded Oran City. First, he is looking for a way to escape the city but later on, he decides to stay to support the others in solidarity.

This collective fight against the pandemic leads to equality and belonging, where all people experience a form of exile, live in isolation, separate from their beloved, and fight against death; we are all prisoners, sharing the fear and the uncertainties of the moment.

Do we understand the plague as a collective disaster that we all must fight against in support of each other? Or, do we experience distress as individuals and believe that one’s own pain is unique and separate? Does this encourage solidarity and compassion between humans or is it a reason to blame each other?

Two suspended mobiles, hanging from the roof, moving in the air, describing our current present: spending time between our newborn, who just starting to discover the world, and a pandemic that has invaded the world, obstructed our lives. We are here, as is everyone, suspended in an uncertain future.

According to the theories of Sloterdijk, the first sphere in which we are immersed is the mother’s uterus. We come from a lost continent in the womb, from an interior, enclosed and intimate space, a space we’ll constantly seek for refuge.

“Attempt to disappear” is an art project about the impossibility to let go of loss. All the “lost continents” we once inhabited are no longer there, and what remains are the memories we carry. Attempts to control our inner desires and show our vulnerabilities leave us disoriented. Being lost is a way of inhabiting a space by registering what is not familiar: this “disorientation” (the orientation we do not have) can allow us to rethink the phenomenology of space.

The video installation is a reflection on the intimacy of the body, the remains of memories based on concepts of proximity and distance. It presents a dichotomy between the presence and the absence we experience daily through the acceptance of loss and control.

My body is tied, hooked
to a lost continent
unsettled terrain
moved
by the incoming tide
no matter how hard
it tries
in several attempts
It comes
and disappears
undoing memories
vanishing
into a past time
fuzzy presence
of an uncertain future

The piece for this exhibition features animations based on watercolours of some of the birds, mammals, and snack foods that I encountered during my time in the Gaspésie.

In the late fall of 2020 I moved to the Gaspésie, a predominantly rural section of the province of Quebec, to overwinter. While a homecoming to my birth province, the Gaspésie was an area that I had no ties to. By January of 2021 I found myself unexpectedly living alone in a motel under a province wide curfew. In order to help mitigate the feeling of isolation and manage my anxiety and depression, I spent as much time I was able to, walking through the two coastal parks – Pointe-Saint-Pierre and Green Point –  that were across the highway from where I was staying. My companions in isolation became the birds, many of them waterfowl and shorebirds I had never encountered before, and the marine life, specifically the seals who had started a colony on the rock island facing the park by the time I left the area in early April.

Ongoing research into the relationship between Ecuadorian audio-visual archives from the 1990s and the history they narrate.

Through a participatory writing methodology, Daniela Delgado Viteri initiated a series of correspondences with the Ecuadorian community in Madrid to reflect on these archives. Viteri questions the point of view of what is visible and what is left out of the picture. Through collective writing, it starts a process of group reflection where the contradictions of the representation of a country's memory are visible while denouncing the invisibilities of specific narratives and points of view. The video has realized in collaboration with Brian Heredia, Juan Cuéllar, and Jorge Castrillo.

In the chaos
I mourn
The silence

A visual haiku of a fleeting moment of lucid silence.

The concept started as a commentary about living vicariously, a symptom of modern social media which, unfortunately, has been worsened with COVID. As a very introverted person, I find it ever more difficult communicating in reality, especially with the added circumstances of social distancing and keeping to your bubble.

I wanted to film fleeting glances of fenced places, private places to emphasize this feeling of inaccessibility and failure to communicate.

But then, I stumbled across a semi-secret garden, which was empty and silent, and it put a different spin on my take: I started going to all the parks I knew, the ones off the beaten path. And they were empty, quiet, perfect.

All the empty benches in the empty parks reminded me of a council of silent voices, uninhabited, abandoned. They spoke of nostalgia, regrets, unfinished histories, spleen, waiting, mourning. These liminal silent spaces talked to me of sadness cannot be put by words, So I put it by images.

In the video I love me, images are put together with inspiration from George Demeny’s Je vous aime - a photographic-pedagogical experiment from 1891, where images were to be used as tools for the hearing impaired. Demeny, looked into the sun so that the camera could expose a photo with every lip movement while he was saying “I love you”. The photographic film’s need for light was great at the time. The educational result wasn’t successful, but the experiment became an important step towards moving image. I love me moves backwards in art history towards the still image and inwards towards the need for self-love; the goal of every self-help program. The invitation of loving oneself might be off-putting as the most banal, yet it is one of the hardest tasks.

Manel Romdhani (Tunisia)
It's not the distance that measures the remoteness

The storm came...
I was forced to return to Tunisia; I feared being alone in the lockdownin Beirut
From Beirut to Cairo...
From Cairo to Tunisia.
A complicated, stressful, and obligatory passage..."

When the Ebola epidemic broke out in March 2014, the simplest human touch was quickly discouraged across the three worst-affected countries in West Africa. Avoiding close contact with the bodily fluids of infected individuals became imperative. In Liberia, people had to change how they greeted each other and how they said their last goodbye. Traditional burial ceremonies were rewritten and mourning practices such as washing the bodies of the deceased were banned. This was also the last time Mats Hjelm was in the Liberian capital, Monrovia, filming for his most recent documentary film.

Unable to remain in Monrovia, Mats entrusted Preston Jackson, a Liberian social worker who is the main character of his documentary, with a film camera, a sound recorder, and a set of instructions. Preston now becomes both a protagonist and a filmmaker himself.

In the year that followed, Preston traveled with this film camera around the country making short videos about the Ebola crisis: visiting clinics and schools, interviewing friends, speaking to victims of the epidemic, and reflecting on the news while driving. The memory cards were sent back to Stockholm by Fedex in envelopes that arrived with several weeks’ delay after being quarantined at the border. This short film is from when Preston visited an Ebola clinic.

Now with the Covid pandemic racing through the world, the Ebola epidemic in West Africa gets a whole new meaning. It talks about the limited resources in sub-Saharan Africa and an Epidemic that affected young and poor people, but also what is possible when there is a collective effort.

While the Covid pandemic is most dangerous to old men - it draws enormous resources that maybe could be spent on diseases that affect people with longer life expectancies and the preservation of the environment for future generations.

One night in my studio, I find myself struggling with new ideas when I notice three small lights touching my wall, reaching from three holes in my window - tiny moons inhabiting dark space. I am mesmerized as time stands still. In this instance of awareness, the holes from my window burn holes in my mind, and in my memory.

Branches of light and shadow perform gestures on the wall, blessing my space.

I wonder if these impressions come and go, unnoticed? Do I miss the nuances around me when my mind is preoccupied? Can I look inward to understand why moments of ephemeral light bring me so much joy? Should I search for scientific explanations?

In Plato's cave, shadows on the wall were a reality for prisoners; not an accurate representation of the real world. But IS there reality in darkness?

The tiny moons on my studio wall are somehow eclipsed and disappear. My mind questions over and over … what is really happening? The studio is dark again, and the rhythm of life returns back to normal.

A work about repetitions and longing to reach out and touch someone´s life. A new reading of the Plague by Albert Camus in the light of the pandemic has given me a chance to think about existential questions. The journalist decides to stay in the city of Oran separated from his love. A friend from Syria told me his story. He doesn´t stay in Damascus to do his military service, he leaves not to get killed. He leaves as a young man his girlfriend and family and travels through countries, over mountains, valleys and lakes. More than seven years later they reunite far away from their homes and families. Mountain ranges separate and holds together.

We have been living for more than two years in a hard time, a period of doubt, an era where vagueness reigns. We live from now on, with new reflexes, the social distancing, and fear of rigor. For me, converting our gaze also means converting a relationship to a technique, which I applied in my video Angelus. This work is critical to the distance that I took through this technique. I appreciate the nuances of color, melt it, form it, remove any line, avoid any trace, and leave only areas of doubt of possible futures. This work is a praise of nuances, a praise of the twilight, an atmosphere of meditation that reigns in the painting "The Angelus" of Jean François Millet.