The first magical lantern was developed in the 1650s by the Dutch physicist Christian Huygens. A few years later, the Danish mathematician Thomas Rasmussen Walgensten constructed a usable magic lantern, and it was he who gave the name "Laterna Magica" to the beautiful appliance that used candles as a light source to reflect hand-painted pictures from transparent glass panels on walls.

Walgensten built magic lanterns for a number of buyers in Europe, including the enthusiastic Danish King Frederik the Third. Laterna Magica Museum has several very beautiful specimens of these lanterns.

The magic lantern is an early image projector that inspired the development of the camera and the photograph, which in turn opened up new possibilities to capture real life and combine it with fantastic tales. 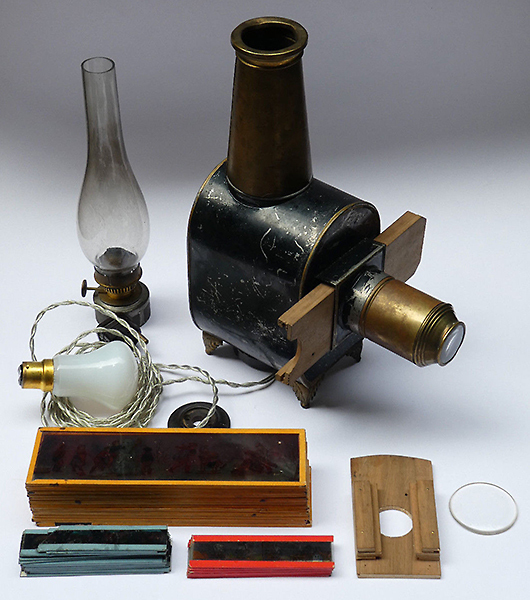 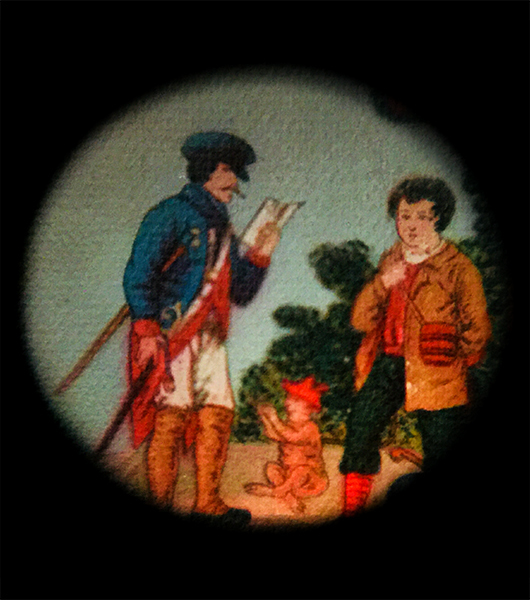 The magic lantern, also known by its Latin name Laterna Magica, is an early type of image projector employing pictures painted, printed or photographically produced on transparent glass plates, one or more lenses, and a light source.

It was used for entertainment and educational purposes during the 19th century, and since the late 19th century smaller versions were mass-produced as a toy for children.

Ernst Plank was a German manufacturing company established in 1866 that built toy steam engines, trains, boats and magic lanterns at Hochfederstrasse 40 in Nuremberg.

The city was a major centre for metal toy production and export in the latter part of the 19th century and up to World War I.

The barrel shaped magic lantern above is of painted black tin, has a brass lens, chimney, brass feet and decorations. It has two wooden slide holders for showing large and small handpainted glass slides. The lantern is from the period when the light source was changing. It was originally lit by kerosine lamp that was later replaced by an electrical light bulb, reflecting the technological development of the time. 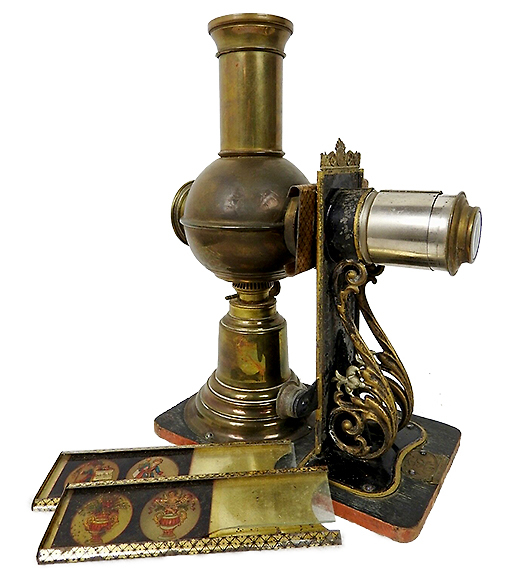 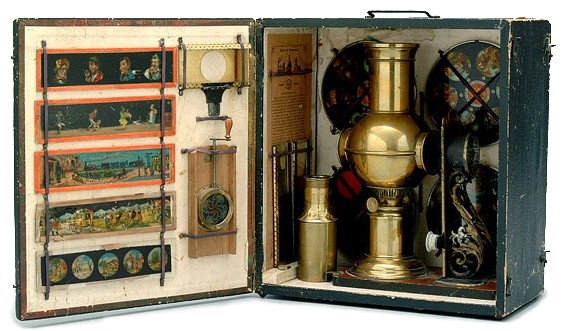 Children's toy magic lantern projector, designed for domestic use, with circular and rectangular glass slides. The 'Brass Climax' was a special variant of the 'Climax' model and was produced specifically for the British and United States markets.

When originally bought, the lantern came in a box complete with an assortment of slides. While the standard slide holder takes rotating disc slides, the box would normally contain accessories which allowed for the use of strip slides as well, as shown in the photo above.

The magic lantern is generally seen to be invented in the 17th century, but its greatest popularity as an optical projector spans the late 18th Century to the early decades of the 20th Century. It was used both as a means of entertainment and education.

The body of this magic lantern is of polished brass with a spere incorporating a single wick kerosine burner as an illuminant. The projection barrel is composed of tin, while the lens is encased in a brass housing. A decorative slide holder of blackened tin takes rectangular slides and circular slides, typically made up of six individual pictures. It is decorated with a gold coloured trim and an ornate slide holder exhibiting a pressed metal decoration incorporating the manufacturer's logo of a winged wheel above the initials E.P.

The Thornton-Pickard Imperial magic lantern was a horizontal enlarger for quarterplate glass negatives. Thornton-Pickard was a well known British camera manufacturer established in 1888. The company was based in Altrincham, near Manchester, and was an

early pioneer in the development of the camera industry. This photographic enlarger for glass plates was made of cedar wood with a metal 'house', brass and glass lens, aluminum fittings and a dark cloth.

The Dutch scientist Christiaan Huygens is widely accepted as the true inventor of the magic lantern in the 1600s. The name “magic lantern” comes from the experience of the early audiences who saw images mysteriously appear on the wall, as if by magic. Even in the earliest period, performances contained images that moved - created with moving pieces of glass. The first magic lanterns were illuminated by candles, but as technology evolved they were lit by increasingly powerful means so they could be used in large public shows as well as in community buildings, schools and homes. By the 18th century the lantern was a common form of entertainment and education in Europe.

Magic Lanterns have come in a variety of shapes and sizes, and can be divided into two large classes, those for children, and those for adults. The magic lantern shown above belongs to the adult category. Several hundred companies made their own brands with various models. There is no published description covering all the different kinds of lanterns.